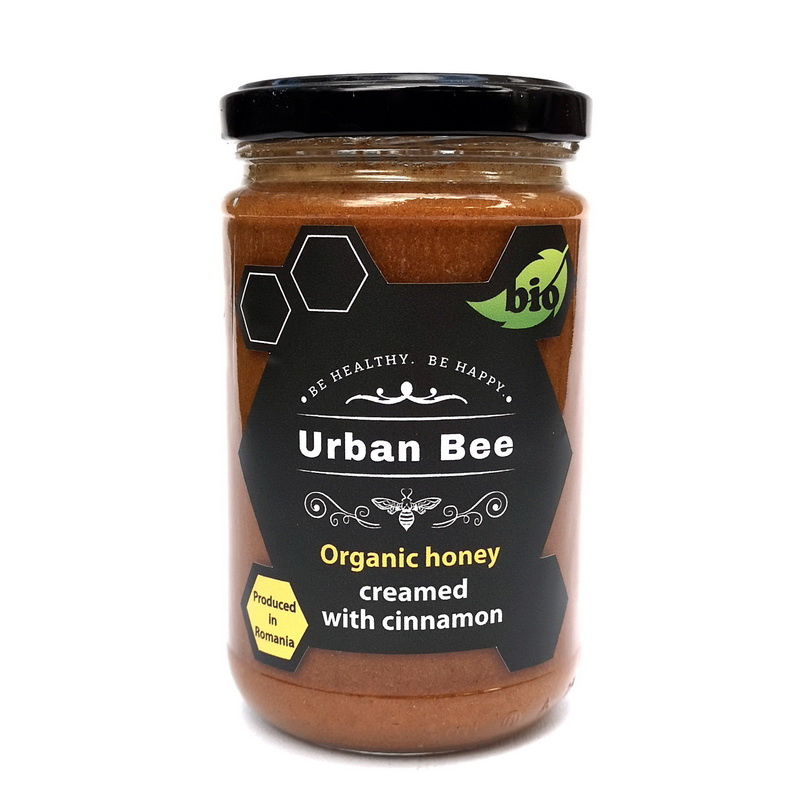 Creamed honey is honey that has been undergone a special mixing procedure in order to control crystallization and influence the size of the crystals. The result is  a honey with a smooth spreadable consistency and a delicious texture. The process does not involve heat or  chemicals. It is purely mechanical and does not influence the other properties of honey.

The mix with a generous portion of Ceylon cinnamon ("true" cinnamon) makes for a very delicious combination that will delight your taste buds and enhance your well being with its natural health benefits. Enjoy it simple, as a snack or on toast, on top of your morning yogurt, porridge or other deserts.

Raw honey or “as it exists in the beehive” is made by extracting honey from the honeycombs, pouring it over a mesh to separate the honey from impurities (like beeswax and dead bees) and bottled.

For commercial reasons, most brands of honey are pasteurized and filtered. Pasteurization is a process that destroys the yeast found in honey by applying high heat. This helps extend the shelf life and makes it smoother.

Also, filtration further removes impurities like debris and air bubbles so that the honey stays as a clear liquid for longer. This is merely done for aesthetics reasons.

Some commercial honeys are additionally processed by undergoing ultrafiltration. This process further refines it to make it more transparent and smoother, but it can also remove beneficial nutrients like pollen, enzymes and antioxidants.

What’s most impressive about raw honey is that it contains nearly 30 types of bioactive plant compounds. These are called polyphenols, and they act as antioxidants.

Many studies have linked these antioxidants with impressive health benefits, including reduced inflammation and a lower risk of heart disease and certain cancers.

Cinnamon is a popular spice, known more for its delicious taste, but not everyone knows that it is also very healthy. Cinnamon is high in cinnamaldehyde, which is thought to be responsible for most of cinnamon’s health benefits. Cinnamaldehyde has antifungal and antibacterial properties, which may reduce infections and help fight tooth decay and bad breath. Cinnamon is also rich in antioxidants that have anti-inflammatory effects, which may help lower your risk of disease. Consuming cinnamon regularly may improve some key risk factors for heart disease, including cholesterol, triglycerides and blood pressure. Cinnamon has also been shown to significantly increase sensitivity to the hormone insulin.

Not all cinnamon is created equal though. The Cassia variety contains significant amounts of a compound called coumarin, which is believed to be harmful in large doses. All cinnamon should have health benefits, but Cassia may cause problems in large doses due to the coumarin content.

Ceylon (also known as "true" cinnamon) is much better in this regard, and studies show that it’s much lower in coumarin than the Cassia variety.